I grew up in a family where a woman’s value was inversely proportional to waist size. The focus on thinness was so important, my mother use to tell me the reason women got fat was that they had premarital sex. Teen pregnancy, HIV, and STIs were a less scary consequences of sex than getting fat.

This resulted in me feeling horrible about my body. At eighteen, I was six feet tall and 150 pounds, and believed I was grossly overweight. I believed I could never be desirable or sexy. As I aged, I was not able to maintain the 150 pounds and began to gain weight.

I met my first long-term partner in graduate school at the age of 26. She was funny, and sweet, and loved me. We were together for twelve years. For various reasons, as the relationship fell apart, so did our sex life. The last two years of our marriage were sexless and she repeatedly stated she did not find me desirable. This left me, at 38, feeling horrible about my aging body and believing that I could never be an object of desire. I hated what I saw in the mirror.

First, I unlearned decades of familial and cultural messaging. We are surrounded with media images promoting the idea that thin, fit, young, and white is what is desirable. It is impossible to be flooded with these messages all day and not take them as some version of the truth. I had to change the messaging I was taking in to start. I changed my social media feeds to favor plus-size influencers, people working on healing trauma and body image, and actively blocked feeds of people touting that thin equals sexy.

Second, I did the deep work of unlearning toxic cultural messaging. I started reading books like The Body Keeps Score and My Body is Not an Apology and doing the workbooks they suggested. This is not easy work. It is hard to forgive yourself for being mean to yourself and quiet the inner voice yelling that you are fat and ugly and not desirable. But if you do the work, that voice gets quieter until you reach a point there are days you don’t hear it.

Getting Real About Health

I started to look at my real health history. Like most fat women, doctors blamed everything on my weight and automatically assumed I never worked out and only ate fast food. The answer to every health issue was “diet and exercise.”

I had the diet and exercise routine down. My first diet was at six years old. Most of my life I hit the gym four to six times a week and worked diligently to eat healthy. When I started to look at the drugs I had been prescribed, I found lawsuits and case studies showing most patients gained a lot of weight. One drug I had been on for six years was eventually removed from the market because the average patient gained 100 pounds in the first year on it. Others also were demonstrated to have significant impacts on metabolism and body composition. I confronted doctors about their fatphobia and what turned out to be significant missed diagnosis due to their bias. As I healed from years of malpractice and found actual health, not just thinness, I began to appreciate my body.

Today, I am still fat. I am six feet tall and 275 pounds. However, my body is strong. I love working out, I love digging in my garden and doing yoga and boxing. Seeing how I can control my own body and the output of my muscles became sexy to me. I may not have a 26-inch waist, but I did build an entire fence around my garden with my own body and that is impressive this close to 50!

Once I started the unlearning process and the road to addressing health and not the numbers on the scale, I took the big step and started doing nude photos. There is little more terrifying than your first nude photoshoot! As someone who spent two decades avoiding any pictures because they reflected a body I hated, stripping down and having a person take nudes was not the top of my “to-do” list. However, when the photos came back, I sat with them for a long time. I could see how the photographer saw me as desirable and desirability was reflected back to me. Seeing my big butt in all its glory in those photos was the first time in my life I could see how someone saw this body as desirable. 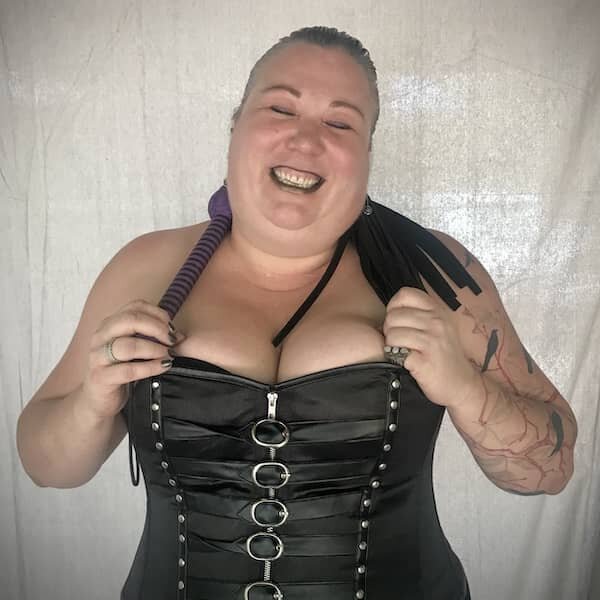 Rebecca Blanton (aka Auntie Vice) is a writer and performer. Her work focuses on kink, adult sexuality, and gender. She performs as a storyteller and stand-up comic. She holds a Ph.D. in Political Psychology.

A summer pleasure magick embodiment retreat for your coming-back-to-life self.

These statements have not been evaluated by the Food and Drug Administration. This product is not intended to diagnose, treat, cure or prevent any disease.